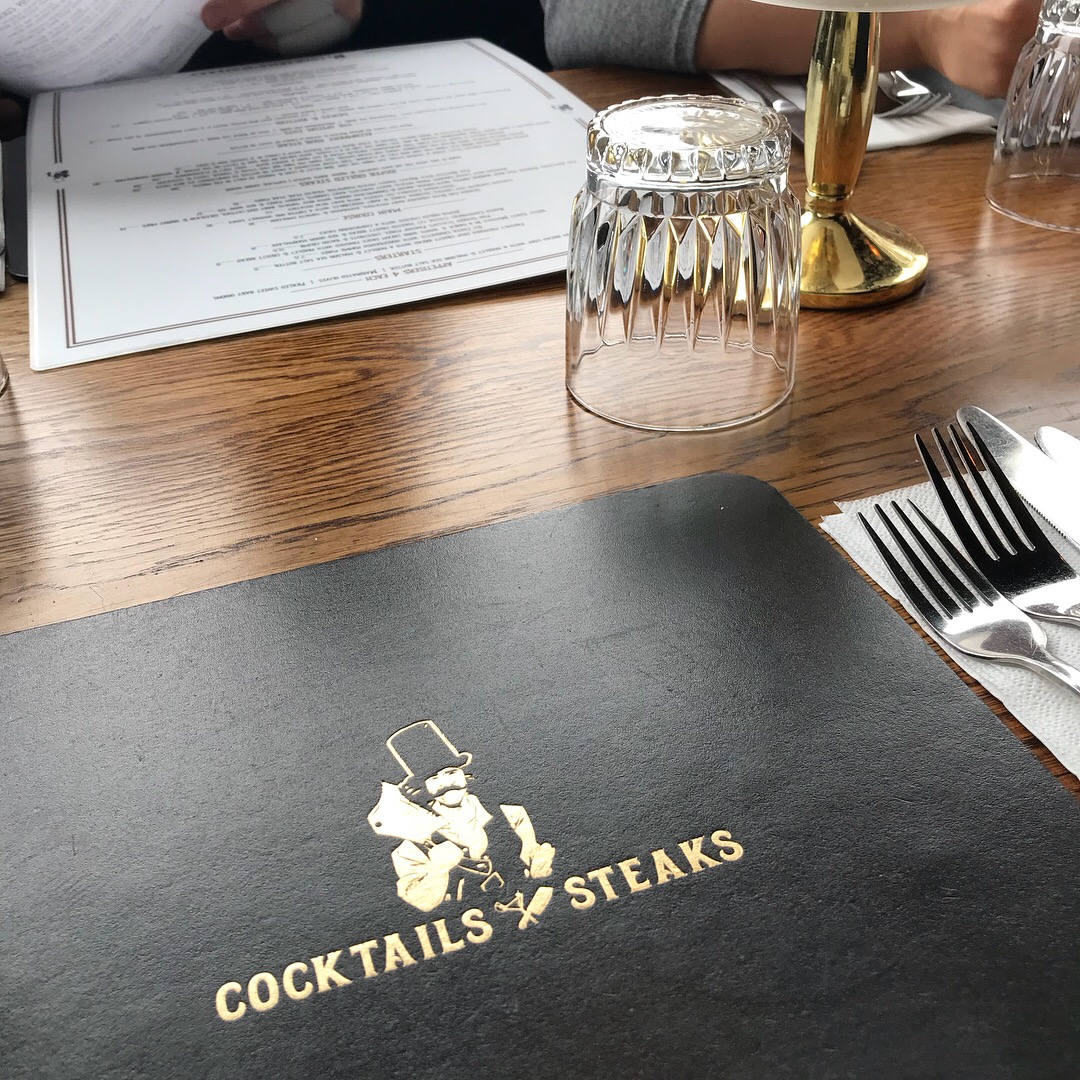 We had good intentions of going for breakfast this morning when Jonathan (my fiance) and I met up with our friends Simone & Jason. They’re getting married in July this year, and we got slightly distracted in wedding shenanigans (all will be revealed on 08/07/18), which meant that we didn’t leave to head upto Uddingston Main Street until midday. Cue us arriving at Angels Hotel to be told there were no tables, followed by Smiths which was fully booked as well meaning we ended our hunt for food in Cocktails and Steaks. It boasted a Sunday Roast, which we were all pretty keen on having (and although Simone is a fiend for a Toby Cavery, we were short on time, alas…).

The restaurant was empty when we arrived around 12.10pm, and it instantly reminded me of #porterandrye with its dark wood steakhouse vibes. The waitress asked if we had booked, which we hadn’t, and we got offered a seat by the window with lots of natural light, which I loved. 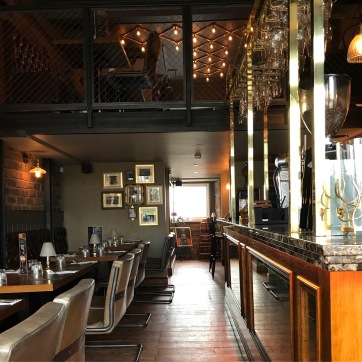 The seating arrangement is booths on one side and slide in chairs on the other, which can be seen in the photos above. I found the chair comfortable and the specially branded placemats and crystal water glasses were a tasteful touch. However, although Simone and I are big fans of 90’s RnB (Pony by Ginuwine featured), I’m not so sure it’s exactly suited to the ambience the restaurant is trying to create, as it was being played just slightly too loud for Sunday lunchtime. They playlist creator does need to be commended for their taste; but I’d prefer to hear it in in the evening and preferably with a Mojito in hand. 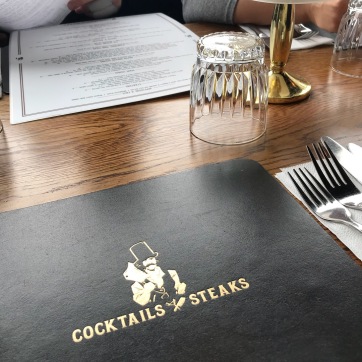 Now our food order ended up being something that rarely happens to me, moreso because I fundamentally don’t agree with everyone ordering the same thing regardless of whether you’re sharing or not (I like looking at other potenital dishes on offer even if I’m not eating them ok?! Call it future planning!) – but we all ordered the same 2 courses from the Sunday Menu for £17.95.

I’ve been trying to increase my protein intake recently, hence why I chose the ‘Josper grilled chicken with a chimichurri sauce’, rather than the baked camembert like I usually would (you’ll soon find out how obsessed with cheese I am after we’re a few reviews deep…). But honestly, I’m glad I did – as the chimichurri sauce is one for the tasting! A perfect balance of herbs that aren’t too overpowering with a sharp punch of vinegar and olive oil underpinning it all. I’m a great lover of sharp flavours, and I do believe it lifted the dish into something ‘moreish’, which we all agreed on. Chicken was cooked well; both juicy and succulent on the inside but with a crisp finish on the outside. This rested on a small bed of leaves with small touches of (what I believed to be) butternut squash puree around the side. 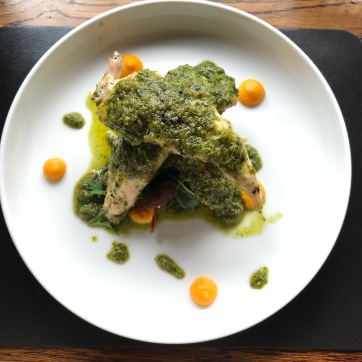 The roast itself is served pink, unless you specify that you like it cooked otherwise. They are generous in their portion of beef; I was given two slices, which you can see takes up the majority of the plate. And the most glaringly obvious highlight of the dish is the quality of the meat, which they state on their website is from Scotch Beef, and therefore of excellent quality (it isn’t being biased just ’cause I’m Scottish.)  I also thoroughly enjoyed the homemade Yorkshire pudding, with the bottom of it soggy with gravy that had been so thoughtfully poured inside for me. I would have liked the roasties to be slightly more crispy, but I know that can be difficult to create in a restaurant setting within the limited confines of service time. The vegetables were hidden under the beef playing their own little game of hide and seek; which I happily indulged them in playing but left slightly disheartened with how quickly the game reached its resolution. There was the baby turnip you see below, with one stalk of brocollini, one asparagus tip and three or four small pieces of carrot that would have benefited from some caramalisation. The liberally poured gravy distracted me from any despondancy I may have felt with the vegetables though as it quite literally danced over my tastebuds for the duration of my main course. There had evidently been some time spent on deepening its rich flavour, thus enhancing the whole dish overall. This is where a Sunday roast at Cocktails and Steaks is a step above your generic pub roast; the outstanding ingredients being carefully handled by their evidently talented chefs, and heightened through careful consideration of how best to handle those ingredients. 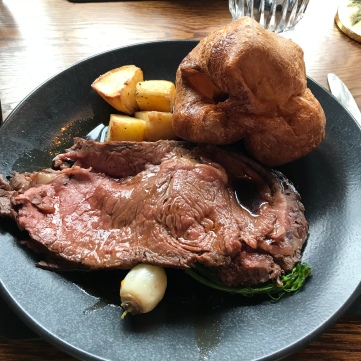 This is true of both courses I tried today, and it did mean I left thinking that I wouldn’t mind returning to sample more from their Main Menu. Considering how busy Angels and Smiths was, I was surprised that only two other people arrived whilst we had our lunch. There was only one waitress working as well, which could have been a problem if they expected the same level of traffic as the other restaurants. She was prompt in her tasks in terms of clearing plates and providing more water for the table, but we felt she was slightly awkward at times. The best interaction we had with her was actually right at the end – maybe she was distracted with getting things set up for the day beforehand.

Our meal concluded not long after an hour of being in the restaurant, but this was due to us requesting our main course quickly following our starter, as Simone and Jason had to catch the train home to London. Although we didn’t end up getting the breakfast we’d prepared ourselves for, we left Cocktails and Steaks content and with our interest piqued for a potenital evening meal in the future. 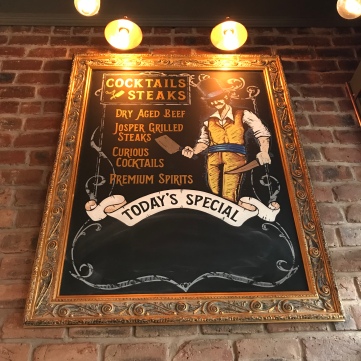